Vitamin D has been much in the news for its many benefits, but did you know it may also help hair loss? 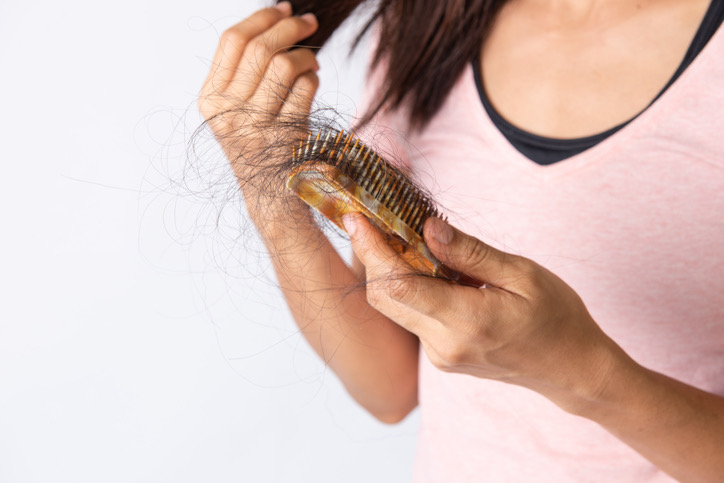 Vitamin D is understood to be one of the most important nutrients required for the body to function optimally and for an individual to be healthy.

It is also famous as the nutrient our body can absorb simply through exposure to sun.

A deficiency in this essential vitamin can have many negative consequences, and has even been linked to hair loss directly and indirectly.

If you have a vitamin D deficiency then that can lead to conditions that cause hair loss as a secondary symptom, and there is evidence to suggest that vitamin D is directly involved in supporting the process of hair growth and hair follicle health.

If you not taking any form of supplementation, and idon’thave regular sun exposure, then you may experience some of the following:

If you do not have enough vitamin D for your body’s needs there can be many health consequences, many of which can lead to hair loss or thinning hair.

A study from the Dermatology Online Journal discussed research on the role of vitamin D in hair disorders and the cycling process of the hair follicle.

They found that it plays an important role in the differentiation and proliferation of keratinocytes, the highly specialized epithelial cells which make up over 90% of the cells of the epidermis, the outermost layer of the skin.

Keratinocytes are understood to be involved in the development of epithelial cells which are required for healthy hair growth . Earlier studies available from the US National Library of Medicine determined that the use of keratinocyte growth factor promoted the survival of the hair follicle.

Ensuring that your body maintains appropriate and healthy levels of vitamin D is likely to support the processes involved in healthy hair growth where you most need it, at the point where hair growth starts. A study from the British Medical Journal also discusses the role of vitamin D in hair loss and the majority of available information list numerous health concerns connected to vitamin D deficiency.

Another role vitamin D may play in hair loss is discussed in research from the Turkish Journal of Medical Science that determines that maintaining sufficient vitamin D levels in the blood reduces the likelihood of experiencing the effects of telogen effluvium. This is a scalp disorder characterized by the thinning or shedding of hair resulting from the early entry of hair in the telogen phase (the resting phase of the hair follicle).

The study found that those diagnosed with telogen effluvium also had significantly low levels of vitamin D in the blood. This is a very common cause of diffuse hair loss and is a commonly occurring autoimmune disorder.

The resulting condition includes thinning hair, brittle and unhealthy hair, as well as hair that is easily dislodged from the scalp.

There are a number of conditions and illnesses related to vitamin D deficiency and which in turn can have an impact on hair health, leading to thinning and loss.

–   Alzheimer’s disease/Dementia: the results of a study published in Neurology confirm a substantially increased risk for individuals with a vitamin D deficiency

–   Prostate cancer: the American Association for Cancer Research concluded that men with vitamin D deficiency had increased odds of a diagnosis of prostate cancer

–   Erectile dysfunction: a study from the Journal of Sexual Medicine showed that a large proportion of men with ED had a vitamin D deficiency

–   Schizophrenia: an article from the National Institutes of Health found a strong association between schizophrenia and low levels of vitamin D

–   Cardiac conditions: there may be a link with severe vitamin D deficiency and heart disease according to recent research from the American College of Cardiology

How to increase your vitamin D levels

The best way is with a combination of diet, exposure to sunlight, and to only use supplementation during the winter as this is a vitamin that you can take too much of.

Vitamin D is very important for bone health, and has also been linked with immune function and protection against cancer and recommended maximum daily amount for supplements is 10mcg and usually the amount in a good nutritional supplement will provide enough for most people’s needs.

fortified foods – such as most fat spreads and some breakfast cereals

In the UK, cows’ milk is generally not a good source of vitamin D because it isn’t fortified, as it is in some other countries.

When hair starts thinning, which is common at menopause and with non ovulatory periods such as in PCOS, then what can happen is that when  progesterone levels fall as a result of lack of ovulation the body responds by increasing its production of the adrenal cortical steroid, androstenedione, an alternative precursor for the production of other adrenal cortical hormones. Androstenedione conveys some androgenic (male-like-properties) – in this case male pattern hair loss.

If this is what is causing your hair loss, then when progesterone levels are raised by supplementation with Serenity the androstenedione level will gradually fall, and normal hair growth can eventually resume. Since hair growth is slow, it may take 4-6 months for the effects to become apparent.

Also, low thyroid can be indicated with hair loss so ask your doctor to have this checked. Progesterone supports thyroid function so again can be helpful.