Hot Flushes – Why Me?

Some women never get them, but is it ‘all in your head‘ and could your brain be responsible for those flushes? 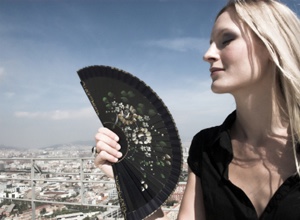 If you are lucky, or unlucky, enough to know a woman who has had no hot flushes then the answer to this question is probably Why Not Me?

Hot flushes on average last for four or five years and occur in up to 80 percent of women – though those on a vegetarian diet seem to fare better as this type of diet is often higher in photo Estridge and is such as soy.

We know exactly what a hot flush is – but despite many advances in science no one quite knows what causes our temperature to soar and makes us sweaty and uncomfortable.

New research may hold the clue

A team of researchers in the department of pathology at the University of Arizona College of Medicine believe they have come closer to understanding the mechanism however.

It seems it may be related to a group of brain cells known as KNDy neurons as a likely control switch of hot flushes. KNDy neurons (are located in the hypothalamus, a portion of the brain controlling vital functions that also serves as the switchboard between the central nervous system and hormone signals.

It seems these neurons play extremely important roles in how the body controls its energy resources, reproduction and temperature.

When you have a flush, your skin gets hot and you can see the redness of the skin. This is the body’s attempt to get rid of heat, just like sweating.

Except that if you were to measure your body’s core temperature at that point, you would find it is not even elevated – however much it may feel as if you are within a fiery furnace.

This is just an experiment on rats so far, but we already know from other branches of science that our minds have a powerful effect on our bodies.  Staying calm during a flush is not always easy, but it will make a difference as stress is a major trigger so taking a deep breath, and having a cold drink will help.

The role of bioidentical progesterone in helping to control flushes is not well acknowledged, but certainly is effective and for severe flushing many women have found a combination cream of progesterone and oestrogen can really help.

It is very common for the temperature control mechanism to be upset during menopause when the levels of both oestrogen and progesterone are falling.

It seems as if it is the changes and fluctuations in the hormone levels, rather than the levels of the hormones themselves, that cause a disturbance which leads to a hot flush.

As progesterone rebalances the hormones the symptoms come under control, but some women do find that they get fast relief  by applying the cream during a flush or sweat to the inner wrist where the skin is thinner as it is more rapidly absorbed.

It can also help  to make the last application of the day immediately before going to bed as many have reported this has helped with sleep issues.

Keeping your hormones in balance is certainly crucial in getting control of your flushes, but if you are not sure whether you need just progesterone or a combination of progesterone and oestrogen then the following will be helpful: