Bleeding After 50? Here’s What You Need To Know

Any change to your cycle should not be ignored and there can be a number of symptoms. 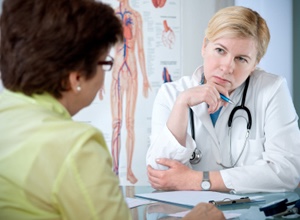 This is not something that is uncommon as 1 in 3 women describe their period as heavy, with 1 in 20 women consulting their doctor about this change to their cycle each year.

How do I recognise this?

Heavy bleeding is blood loss during a period greater than 80 milliliters or periods lasting longer than a week. While this varies from woman to woman, you may be experiencing heavy bleeding if you:

– Require double protection, like with both tampons and pads

– Have your sleep interrupted by your period

– Bleed through your clothes and bedding

The best way to determine if your bleeding is heavy is to consider how your cycle affects your daily life.

Heavy bleeding can cause you to be tired and put you at a higher risk of anaemia, which can lead to dizziness, irregular heartbeat, and shortness of breath.

An unusual flow may also interrupt your day-to-day activities due to cramping, tiredness, and having to change your tampons or pads more often.

Is heavy bleeding after 50 normal?

Heavy bleeding is common among women transitioning into menopause, the point when your body’s reproductive system stops releasing eggs.

One study found that among women ages 42 to 52, more than 90% experienced periods that lasted 10 days or more — with 78% reporting their blood flow as heavy.

This is because when women approach menopause, there are fewer eggs to mature in the ovaries. The body releases higher levels of follicle-stimulating hormone (FSH) in an attempt to maintain normal ovulation, which produces more oestrogen.

These greater levels of oestrogen thicken the lining of the uterus, often resulting in heavier, longer periods.

The time it takes for a woman’s body to complete this cycle can extend as well, leading to longer gaps between periods and more blood flow.

This is usually the start of perimenopause and mostly begins about four years before a woman your last period. But the transition can start as early as 10 years before menopause.

What changes to expect to your cycle at  perimenopause

Over time, oestrogen levels decrease, thinning the lining of the uterus. Periods happen less often until they stop altogether.

But when hormones are still in flux during perimenopause, it’s common for women to experience significant changes to their menstrual cycle. This can include:

The hormone changes during perimenopause are because of a decreased number of eggs in the ovaries. This can result in a longer time between cycles — at least 38 days apart — or missing your period entirely. Women with lower oestrogen levels may experience shorter cycles than normal, but with higher oestrogen levels they can be heavier.

As higher oestrogen levels thicken the lining of the uterus, there can be more bleeding as it sheds.

How to manage heavy bleeding after 50

While normal, heavy bleeding can disrupt everyday life for many women.

Research shows that ibuprofen can help decrease bleeding during periods by 20 to 40% and alleviate symptoms like cramps.

Attention to your diet and lifestyle can help manage perimenopausal symptoms as well, including:

Bleeding can occur in women over 50 after they experience menopause as well.

Studies show that this postmenopausal bleeding is usually caused by conditions like uterine fibroids or polyps. It can also be a sign of endometrial cancer, which affects 2 to 3% of women and is most common among postmenopausal women.

Heavy bleeding could also be a symptom of another underlying health condition. Make sure to monitor your flow and see your doctor if you experience:

– Extremely heavy bleeding — like soaking through a sanitary product hourly

– More than three months between periods

When to see your Doctor

Heavy bleeding and unusual period cycles are common in women over 50. But if your symptoms interfere with your life and well-being, you should contact your doctor.

You may need help to balance your oestrogen and progesterone levels, easing heavy bleeding and other perimenopausal symptoms.

Oestrogen dominance, excess oestrogen over declining progesterone levels, can be helped by rebalancing with progesterone.

It is very important to monitor changes to your cycle and to contact your doctor if you are concerned about of the symptoms mentioned here.

We all want a healthy, stress free peri/menopause and certainly hormone balance is an important part of that.

Fibroids are a concern, so if you need more information on that condition this article will help.